Posted at 17:54h in Uncategorized by admin

A massive field assembled to contest the annual Robert Hodgson Memorial Race at Beauie last Sunday. Each year this event gets bigger and for 2017 we had 3 men’s grades and a women’s scratch grade – a departure from the women’s handicap events of recent years.

The weather was perfect and it was a fitting setting to honour the life of one of NSCC’s finest – Rob Hodgson. The Platinum field was a who’s who of Sydney’s elite riders and the women’s field was also the cream of Sydney’s female racing.

In the platinum race the hurt was being dished out from the gun as the NRS boys were determined to show the clubbies who was boss. Everyone tried to shake the crit specialists like Harrison Bailey and Tristan Ward, but each move was being shut down before it started and the breaks didn’t stick. The first break to stick involved none other than Mick Cupitt who was determined to show the young punks that his legs can still inflict maximum pain. However the bunch was reeling everything in and the big peloton was back together before you could blink. Stu (the professor) Grieve was mashing his SRAM drive train and pumping out enough power to light up a suburb; Ran (Gland) Virdi had his poker face on and was showing no emotion despite the pain. The Taibonater also had his half lap of fame as he went off the front in a typical stomping effort but by the time the bunch came back to the finish he was sucking air and wishing he had stayed in bed.

In the bunch the silent assassin Michael Potter was looking calm as usual and keeping an eye on the moves because he knew he would be in the mix at the finish. After a few more attempts, it was Mick Cupitt and Harrison Bailey who gapped the field with around 8 laps to go. The master and the apprentice – although these days Harrison is hardly a learner after winning a stage in the Tour of Tassie – were swapping off and this looked like THE move of the race. But a chasing bunch of about 6 riders put in the big ones and two laps later the break was now an 8-man group and this was the winning move. The peloton were peddling in squares and lap after lap the break got further away. This break was stacking with class so no one was dumb enough to try anything and they stayed together until the final sprint.

The sprint was electric – and not without controversy – with 50 metres to go it was anyone’s race. In the sprint finale it was a photo between Harrison and Tristan Ward of Team Ultra, but after viewing the race and the video, unfortunately Tristan was DQ’d having crossed the double white line which is not allowed. So the podium ended up with three of Helmut Vetisch’s juniors – Harrison Bailey, Dan Newman and Matt Dunham – filling the podium.

I should comment about the grace and dignity showed by Tristan Ward in accepting the Commissaire’s decision – even though he was very disappointed – without complaint. Tristan you showed the sort of attitude that Rob Hodgson was renowned for and you will go far in this sport.

In the Women’s race this year we had a scratch format which was a big success. I don’t think we have ever seen such a classy field at Beauie and the quality of the racing was first class. It was a good turn out for the womens race being well represented with three NRS Womens teams; Roxsalt, Specialized and Total Rush along with other Sydney A graders and women enthusiastic to race a mixed grade event.

The first lap was full of apprehension for the first attack, as predicted came out of the favoured bottom corner surge. Teams swapped off attacks for most of the race until two got away, one Roxsalt and one Specialized. The pace was too hot for a couple of women who made the dreaded decision to pull out of the race. The remaining team members did their role of blocking the front leaving it up to the A grade women and remaining Total Rush to chase it down. After several unsuccessful attempts the break was let go with the bunch rejoining for a reduced bunch sprint. Ella Bloor and Josephine Meldgaard were simply two strong and held the chasing bunch at bay as they worked well together and showed amazing strength. These women were really motoring and the quality on display holds well for the future of women’s cycling. On the last lap Ella showed that she had more gas left in the tank and rode away from Josephine for a well deserved win. In the sprint for 3rd Jessica Mundy reminded everyone that she can pump out the watts and got herself onto the podium. A great race and I hope the women riders watching were inspired to pin on a number and get into racing.

In B grade your humble author couldn’t help but notice the number of riders wearing skin suits so there was an expectation that this was no normal Beauie B grade. And so It turned out as there were riders off the front from the gun. With so much class in this field no break was going to stick although many riders showed plenty of ticker in having a go. After 6 laps the average speed was 42km/hour and most of us were sucking in the big ones as the pace out of each corner was unreal. A break finally did form with four riders up the road including Phil Hey of CCCC and Rob Redpath who know how to stay away. However the bunch showed great determination and lap after lap ground it out to finally bring it all back together. There were lots of workhorses like Dave O’Connell and Minh Dinh in the chasers and full credit to them for bring the race back together.

The race then settled down to a leisurely 41.5km/hr average and after the ridiculous pace no one had enough left in the legs to have a crack off the front. The bunch were all looking at Phil Hey knowing he can sprint and the final lap was really cagey. On the final bend it was on, and Phil lit up the afterburners and showed who is king by winning by a bike length. Rodrigo Notaro from DHCC was the best of the rest with NSCC junior and Dog Squad member Matt Vassileff finishing a credible third. A great race at an unbeliever average speed meant that this was a B grade to remember.

In C grade a field of 24 riders had a very fast race – with a cracking pace being set by a strong group of 5 riders from the Mainpac Development Squad. Strava shows many of the 15 NSCC riders who entered getting PRs on the circuit. The mainpac team lead from the start and set a strong pace, working together well as a team. During the 4th lap, Joshua Brodie (MTOSS) made a break, but the bunch caught up to him. During the 5th lap, Lincoln Hey (MTOSS) also made a break – which he held for 2 laps before the bunch finally caught him again. During the 11th and final lap, it was a fast sprint for the finish line, but Lincoln Hey and Taylor Forrest from MTOSS were too fast for the rest of the bunch and claimed 1st and 2nd place, with Mark Hanley from Parklife coming in a close 3rd. James Webb and Drastique from MWCC took 4th and 5th, with Jeff Tippett and Paul Mower from NSCC riders taking 6th and 7th place.

A great day of racing, and a fitting memorial to Rob Hodgson.

Thanks to everyone who made the day such a great success! 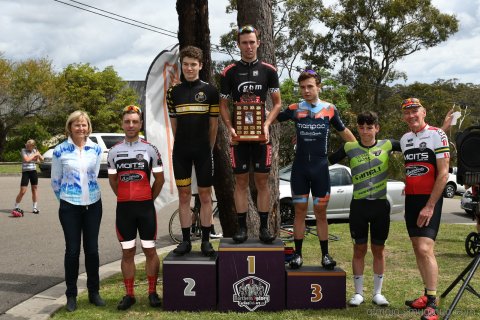