The annual Blayney to Bathurst race has grown over the years with the injection of NRS-level racing and inclusion of the event as a qualifier for the UCI Gran Fondo events.  This year NSCC had many competitors ranging from first-timers participating in the sportif, to serious contenders for Gran Fondo qualification, to NRS team riders.

Two outstanding performances of note were Jason Thomas and Mark Templeton – Mark did an eye-popping race time showing his power to weight ratio is about as good as it gets.  Jason excelled by winning his age category and being crowned champion.

Here is a detailed race report written through Jason’s eyes in the race:

The annual Blayney to Bathurst Gran Fondo event, an ever-growing weekend away for many cyclists, both serious and leisurely alike. Now in the second year of being a UCI Gran Fondo World Championships Qualifier (to be held in Varese, Italy in 2018), but more interestingly in 2018, was to be the Australian Gran Fondo National Championships, as a result of the original event in Ballarat being cancelled in January due to severe heat. So a sudden new appeal of that green & gold banded jersey hung over the minds of many of the age group title competitors.

A very clear & crisp morning greeted everyone in Blayney, likely the first time anyone travelling from anywhere along east coast had experienced sub 10 degrees in 2018

. It was a bit of a shock to the system. The day did eventually progress to be quite a warm one, with very minimal wind out on course, providing a perfect platform for a fast course.

Following the departure of the Elite Men’s Gold Wave & the Women’s grades, a very swollen field with combined, 19-34 and 35-39 age group participants (140 & 120 riders in each, respectively) set off for the age category UCI qualifier, and now national championship 110km long course from Blayney to Bathurst.
Not more than a few minutes into the race, a few attempts already had been made to string out the bunch on various little bergs out of Blayney, it was all somewhat short-lived, with nothing ever eventuating, leaving probably the first 45 to 60 minutes of the race to be relatively sedate, likely now starting to leave a number of faster guys on edge.

Everyone knows there are two main places in this race you can’t really afford to be found caught off guard, the first one coming around 35km in, the steady rise out of Trunkey Creek. Pretty much right on queue, straight out of the left hander onto the rise, the bunch began to string out, also what started to become the first chance to see who was who at the front end of the race. Prevalent jerseys from Randwick Botany CC, Turbo Studio Sydney, Nero KOM Racing and among plenty of others, the race started to pick up another level or two from this point onwards, the front end seeming far more structured pushing forwards. Having said that, nothing overly aggressive taking place, no one trying too hard establish any sort of break. Whether it’s just the nature of this event, still essentially being a Gran Fondo of sorts, it seemed a number of guys were prepared for or expecting a little more aggression with the event now being a national title race. Having said that, everyone knows the one point where this race really begins, and everyone is quite content with not expending unnecessary energy prior to that point.

Pushing on towards George’s Plains, and in towards the second half of the ride, the seemingly more consistent and urgent pace continued right up until the renowned mad rush towards the very narrow left handed turn onto ‘the bridge’ before the base of the Rockley Mount KOM ascent. As mentioned prior, with two main points in this event where one shouldn’t be caught out, that bridge and the slight traverse onto the climb is the second, get caught too far back, and you’ll be fighting for position on the run up the start of the climb, burning matches.

Immediately after navigating the angst that is crossing the bridge safely, the pace begins to form with a lot of riders pushing well forward in prep for the climb, although at this point, the field is still well in tact with most riders still in contact.

The climb itself comes at around 85km into the race and is a bit under 6km in length, at 4% gradient, with most of the climb being relatively steady, it’s the final 1km where the gradient increases vastly.

After around 3km of climbing, the field had reduced vastly to around 40 or so riders with both Tai Huynh & Jason Thomas still in contact, with the aforementioned notable jerseys still at the front and handful of guys still looking rather strong, and somewhat fresh.. A concerning sign for many at this stage of the race.

Cresting the first part of the two stage climb, a couple of riders had managed to slip ahead after a few little attacks towards the crest. A brief descent for 15 seconds leads you onto the second stage of the climb, the toughest part by a fair margin. At this stage, everyone is back together, with likely still 40 guys together. This lasted for perhaps another 1 minute until a very urgent squeeze from young Nero KOM Racing rider, Antoine Gizardin. Antoine managed to gap a small group consisting of 6 remaining riders including Jason from NSCC.

Cresting the Rockley Mount KOM, the small group of 6 riders pushed and began working well with a 20km fast run into the finish at Mount Panorama in Bathurst ahead of them. The group was working well as a whole, and managed to stay clear of a fast charging bunch of around 20 riders including Tai, but were eventually caught 10km later at Perthville.Immediately after the break was caught, the urgency from the now 30+ riders had completely disappeared, allowing another 5 or more riders to bridge back over on the run into town.
It wasn’t until the left hand turn off the main road, enroute up to the finish that the pace began to lift again, numerous riders attempting to launch off the front. The scramble towards the front continued down into the tunnel that leads the riders into the centre of the race circuit, where they navigate through the access roads and into the pit lane and onto the finish straight.
Unfortunately this late scramble in towards the small, narrow culvert lead to a few riders towards the front coming together and bringing a handful of others down. Unfortunately for Tai, he was caught right in the middle, with nowhere to go but into a concrete wall. A huge amount of bad luck that no doubt impeded a great result.
Jason managed to keep ahead of the carnage, keeping in the front few riders for the remaining dash through the fast & tight turns and final run up to the last corner before the sprint. The final sprint, a relatively short downhill run out of the final turn saw Jason taking 3rd over the line, but 1st overall in the 19-34 age group. Antoine Gizardin (Nero KOM Racing) taking the line honours and the Under 19 title, and Ben Wray (Turbo Studio) in second, but taking the 35-39 title. 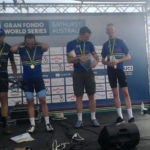 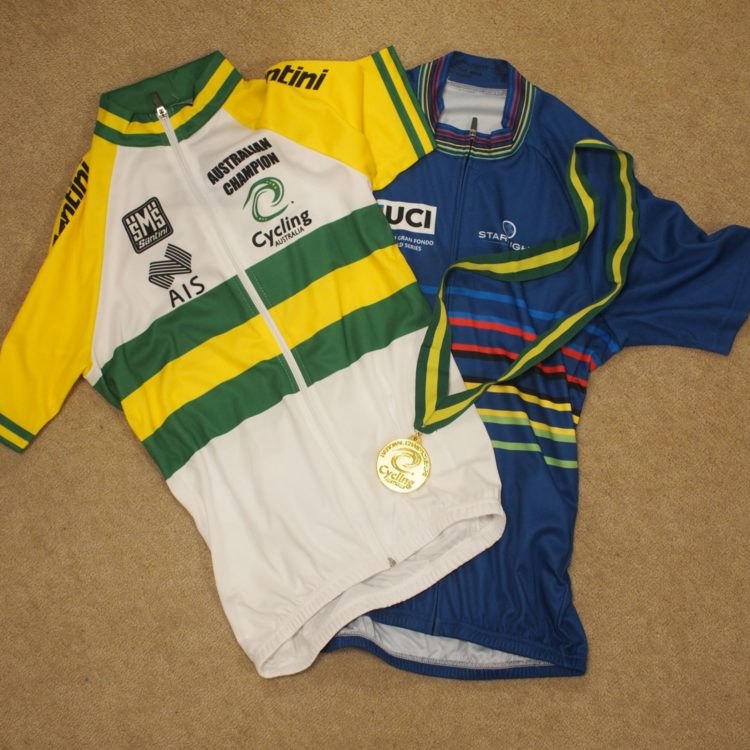 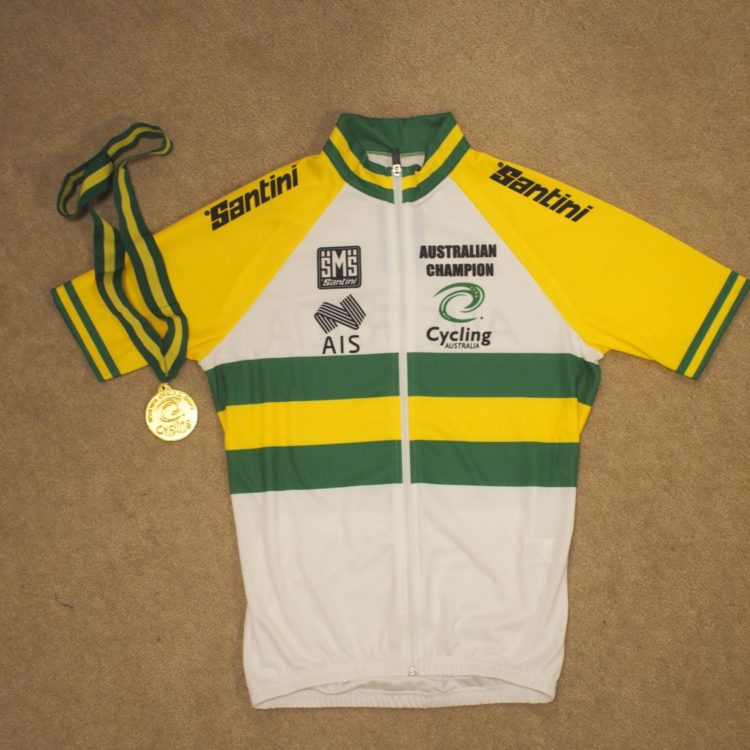