23 May Success at NSW Road Titles

Posted at 17:59h in Uncategorized by admin

This past weekend Cycling NSW held the state road championships in Berrima.

I interviewed Angus today and in his own words:

“The race was super hard, given the heat and cross winds. The U23s were averaging 40km/hour for the first half of the race and were actually faster than the Elite riders. It was away of attrition as the conditions made it hard for everyone and riders were dropping out early.
After 3 (of 5) laps I felt spent as we had been really drilling it. But I looked around at the other riders and saw that all of them were on the limit. On the next berg I signalled to Michael Potter to gas it to bring back the break, and after going full red zone, we blew the bunch apart and then it was on to catch the leaders.
The final group of 10 came together and the race then became very tactical. The eventual winner slipped away almost unnoticed and we let him go thinking we’d reel him back anytime we chose. As often happens we attacked each other then sat up, without riding with any cohesion and suddenly the winner was away. It then came down to a bunch sprint and I found just enough from somewhere to sprint for bronze.”

Angus we are all very proud of you and see this as a reward for your supreme dedication; also great to see a graduate of the #DogSquad lighting it up.

In the U19 I don’t have a race report, but Julian Raubenheimer rode marvellously to win bronze, even though he has only recently come back to structured training. More to come from Julian in 2018 and a current member of the #DogSquad.

In the Div 3 graded scratch race, there was more glory for NSCC with Billy Patterson and Mark Templeton on the podium In typically humble fashion, Mark didn’t provide a photo but gave me these words to describe his and Billy’s achievements

“Bill and I were up early for the drive down to Mittagong for the Div 3 road race. It was a cool morning but ideal conditions for racing. We signed on and sized up the competition in the carpark of the RSL. The race itself was pretty negative, with very few attacks, the bunch was determined to stay mostly together until the final climb to the finish. The initial 18 starters were whittled down to 10 with a lap to go. The token solo attack followed but was caught at the final corner with 5k to go and the bunch of 10 ambled to the base of the final climb with no one pacesetting. Bill and I had already decided that we would up the tempo in the last 500 and that was when the attacks kicked off … it was soon down to a 3 man uphill sprint finish. I thought Bill had taken it on the line (I was 3rd) but after some drama with the timing chip it was decided by the commissionaires that Bill was second by 0.02s. So no win but at least two NSCC on the podium.

Later in the morning we saw Div 2 and U19 mens out on course and Julian was at the front of U19s (and would come 3rd I think). Angus was confident ahead of the U23 race as they were about to head out into the heat of the day, we were happy to be done as the wind had picked up and the day was pretty hot.

All in all a pretty good day on a good hard course, congrats to Bill for a good result albeit very very close to the top step.”

Congrats to all 4 of these guys and also credit to Jack Renshaw and Angus Pearson who also competed in the U23 and rode with courage and pride. 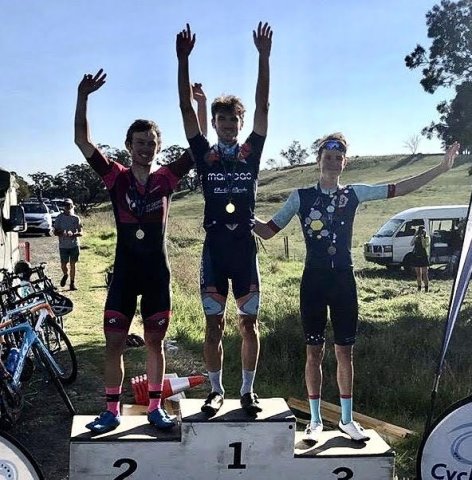 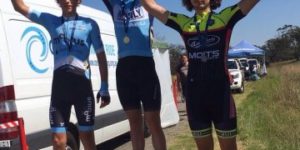